Welcome back to A Macintosh History: a history of the Apple Mac told through the pages of MacUser magazine. This post is based on the December 1985 issue. New to the series? Start at the beginning with October 1985.

This month we dial up, join the Mac Underground, and chat online with Vimco. We get musical with MIDI, turn a Mac into a PC, and play games with our imagination. We learn the secrets of Switcher and wonder if the AI winter is coming. 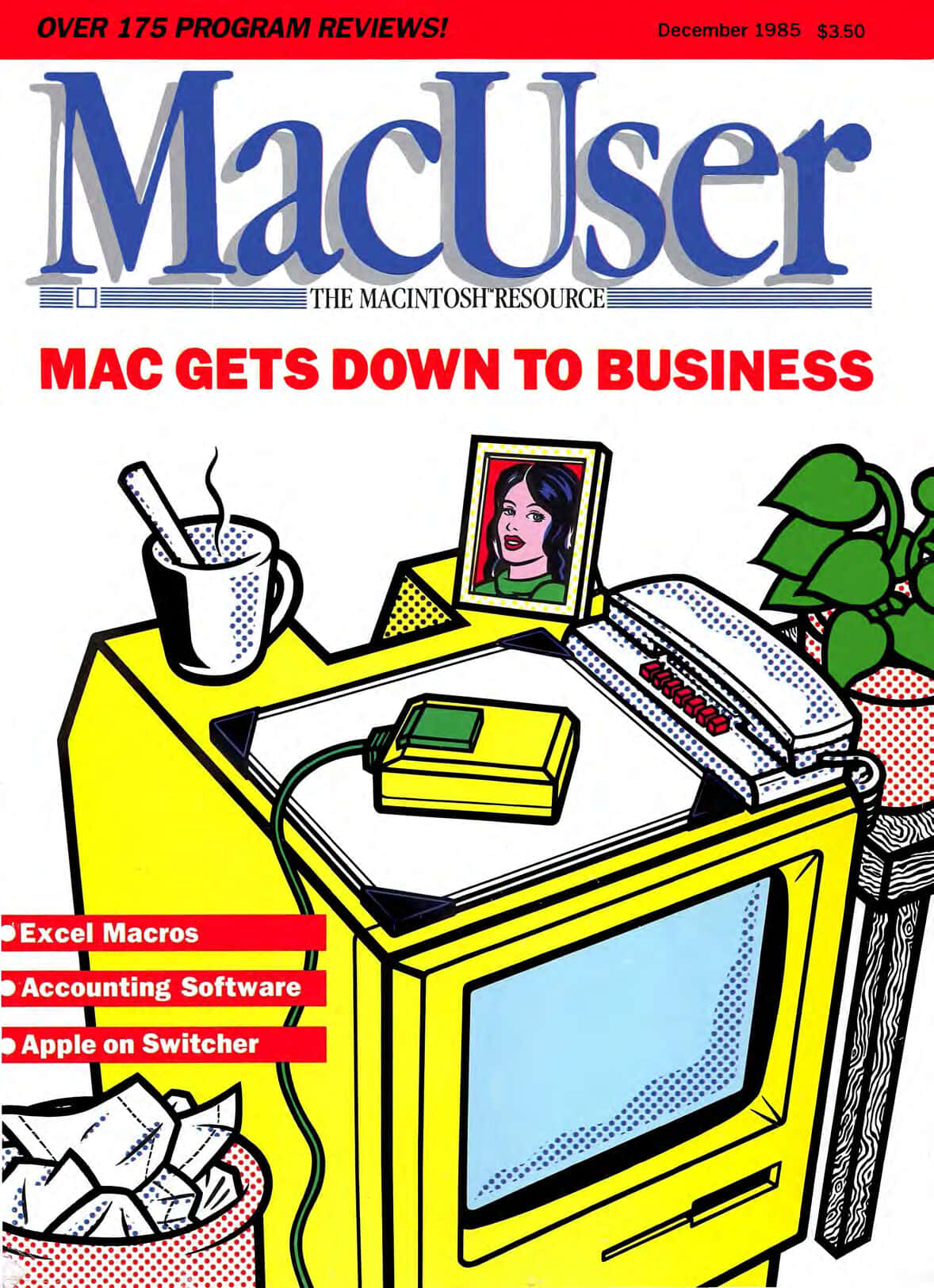 Pick up your copy of MacUser December 1985 from the Internet Archive. Download 68K Mac software from Macintosh Garden and Macintosh Repository.

There was no Zoom or Skype in 1985, but you could hold an online meeting with up to twenty participants using VMCO (page 20). It was free, apart from those pesky hourly CompuServe charges. 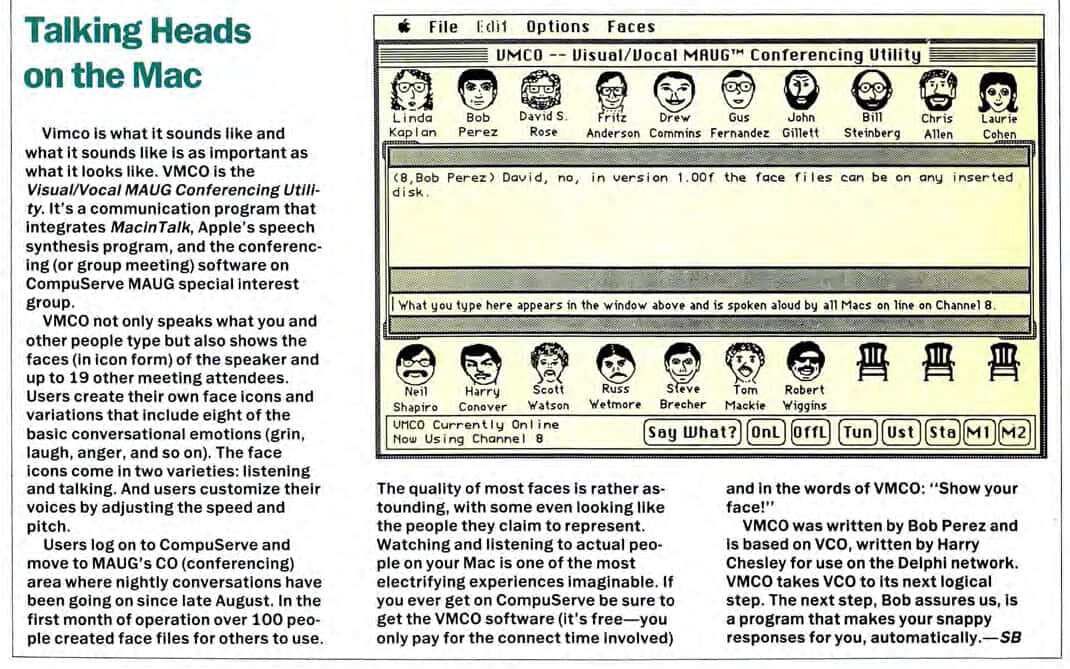 VMCO not only speaks what you and other people type but also shows the faces (in icon form) of the speaker and up to 19 other meeting attendees. Users create their own face icons and variations that include eight of the basic conversational emotions (grin, laugh, anger, and so on). The face icons come in two varieties: listening and talking. And users customize their voices by adjusting the speed and pitch.

VMCO was written by Bob Perez and is based on VCO, written by Harry Chesley for use on the Delphi network. VMCO takes VCO to its next logical step. The next step, Bob assures us, is a program that makes your snappy responses for you, automatically.

What’s in a Name?

Doug Clapp is back with another thought-provoking edition of The Macintosh Boundary on page 31.

I’m in Los Angeles, at UCLA, at the 1985 National Conference on Artificial Intelligence. It’s 1985, and the violent mating of corporate blue-suits and academic genius has spawned rules and machines. 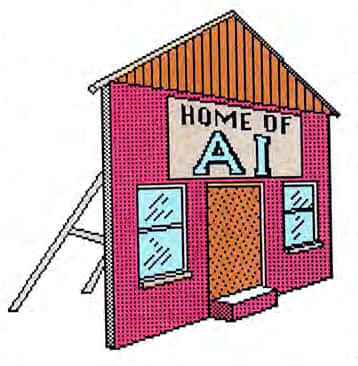 In the old days, the ignorant confused Lisp with “Artificial Intelligence” - AI which doesn’t exist, but someday might. These days, it’s Prolog and OPS-5. From both come rules: ruled-based “automated reasoning.” The blue-suits hawk the complex, expensive, rule-based software systems as “AI.”

If naming is all it takes, AI is here. Everyone says they have it, so they must. Off in the corners, the academicians fret: what will happen to our funding (from the Defense Department, of course) if rule-based systems don’t live up to their promise? The darkest scenario is what the scholars call “The AI winter.” The holocaust of reduced funding.

The scholars weren’t wrong; you can read about the AI Winter on Wikipedia. It’s not all doom and gloom: Sun has new colour workstations on show:

Other machines are even snazzier. A 68020 machine is showing off graphics. A finely-detailed horse on the screen. Oo’s and ah’s. “How’d you do that? It’s beautiful!” The corporate woman looks around, verifying that we’re not overheard. “We brought it in with a ThunderScan and a Macintosh,” she says.

View an advert for ThunderScan (Aug ‘86).

I’ve not been able to find evidence of the Sun-2/160 with colour monitor in the wild, or even a good publicity picture.

Richard Reich is blown away by Excel macros on page 40:

You’ve got Excel. The speed is impressive, the power of the worksheet is stunning, and the macro building power is astonishing. The tape recorder method of macro building makes macro creation easy - unlike anything you’ve ever seen before.

Here are a couple of practical macro examples; the article has loads more. 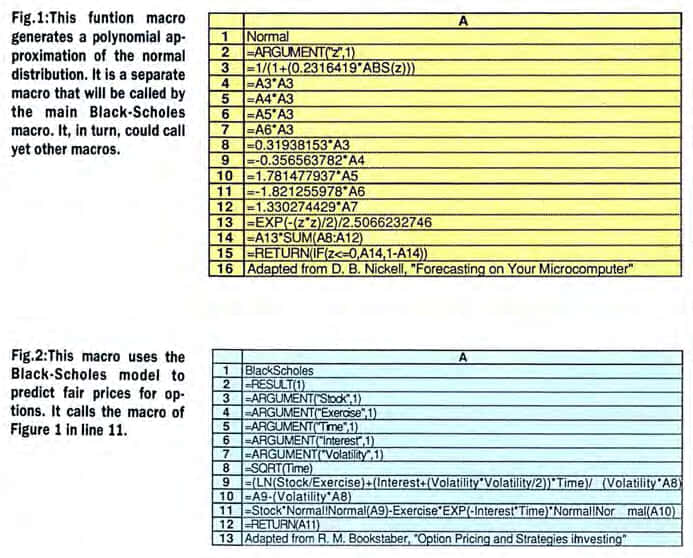 The Normal Function
Since the normal distribution function is likely to be useful in other macros, it should be written as a separate function macro that the Black-Scholes macro can call as needed. Figure 1 shows a polynomial approximation that is fairly accurate for argument values between - 3 and 3.

You can learn about Excel charting (Sep ‘86) or read MacUser’s review of Excel from the first issue (Oct ‘85).

“Where is the Sin in Synergy?” asks Michael D. Wesley on page 60 in reviewing the MacCharlie: a product that promises to turn your Mac into a PC!

There seems to be something inherently wrong with making a Macintosh look and function like an IBM PC. Just thinking about it fills one with horror and revulsion. An IBM compatible Macintosh? This is the stuff of which nightmares are made! 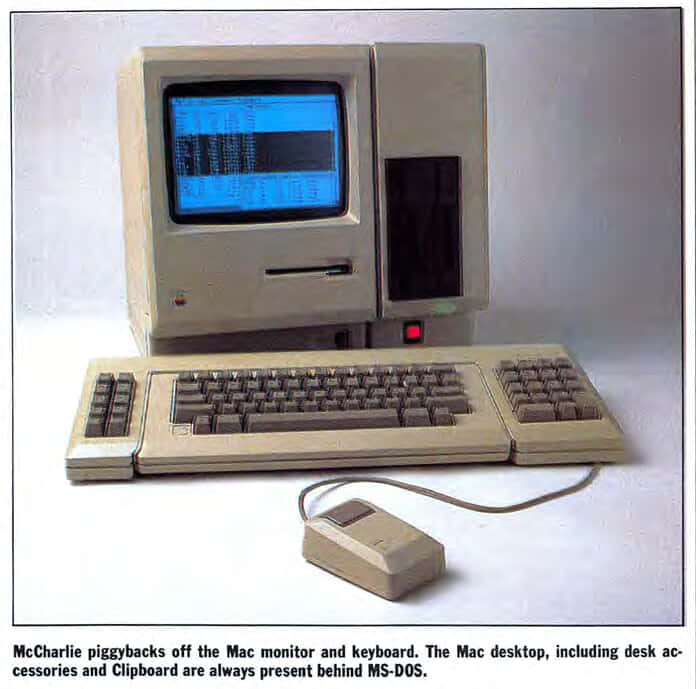 MacCharlie is an IBM compatible computer without a monitor or full keyboard. MacCharlie plugs into the printer port of a Mac, and the ImageWriter connects to the back of MacCharlie.

A keyboard extension with function keys and numeric keypad fits over the Mac keyboard like a cowl. The amalgam provides all the functions found on the somewhat eccentric IBM PC keyboard. MacCharlie has two disk drives and 640K of RAM. The relationship between the two systems is a strange and fascinating one.

MacCharlie functions in the same way as an IBM PC with the IBM monochrome monitor, which means it cannot handle any graphics. A program like Lotus 1-2-3 will run for spreadsheet and database uses, but graphs cannot be displayed on the screen. The other great benchmark program for testing PC compatibility, Microsoft Flight Simulator, will not run on MacCharlie. Even so, with the exception of a few quirks, MacCharlie proved to be remarkably compatible with all the MS-DOS software we could round up.

I can’t help but feel MacUser is overly generous to MacCharlie: it costs $1,800! You could buy a complete PC system for that, even in 1985. Granted, it would take more desk space, but you would have two complete computer systems without all the snags and compromises (and you could play Flight Simulator).

You’re never lonely with a Mac and a modem on page 84.

Want to connect your Macintosh to hundreds of thousands of other people who also own Macs and modems? With your Mac and your modem you can find thousands of public domain software programs, send templates and reports from office to office, and even start a few dozen new friendships.

When you are in the market for a modem, there are two things to keep in mind: speed and compatibility. Speed is measured in “baud.” It used to be that the standard speed was 300-baud which is about 3 characters per second. But the newer 1200-baud modems are now more affordable than they used to be and more and more people are opting for these speedier devices. If you can afford to go the 1200-baud route, that is probably the best way to go.

Once you have your modem connected to the phone line and to your Macintosh (which is running your terminal program), you’re ready to enter into a whole new world. 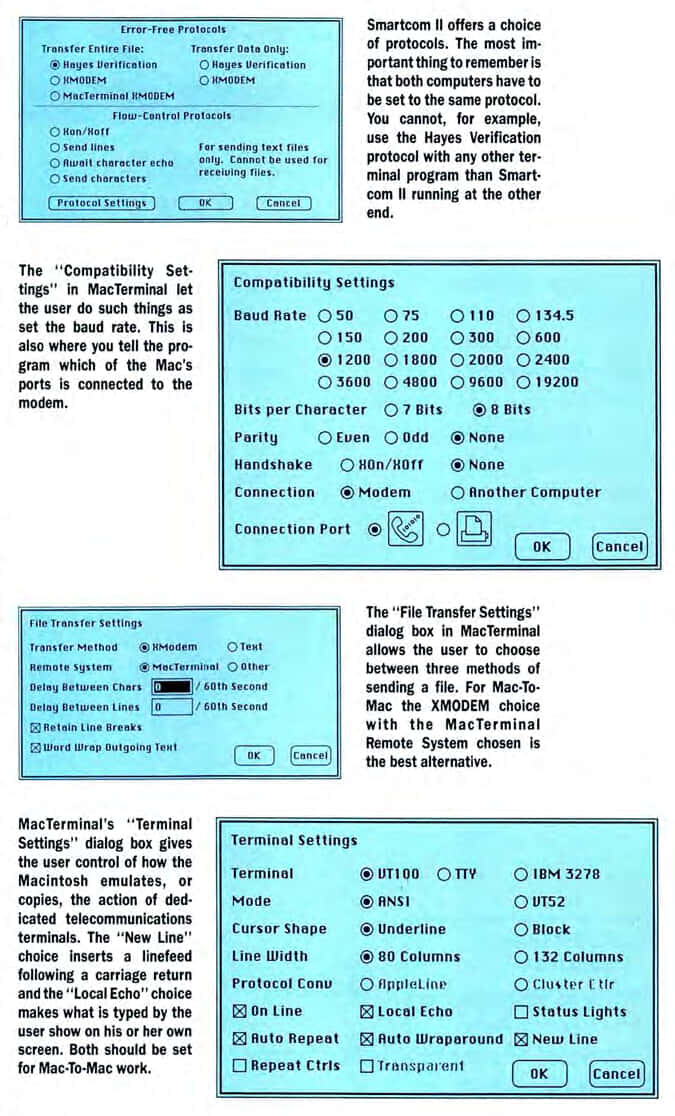 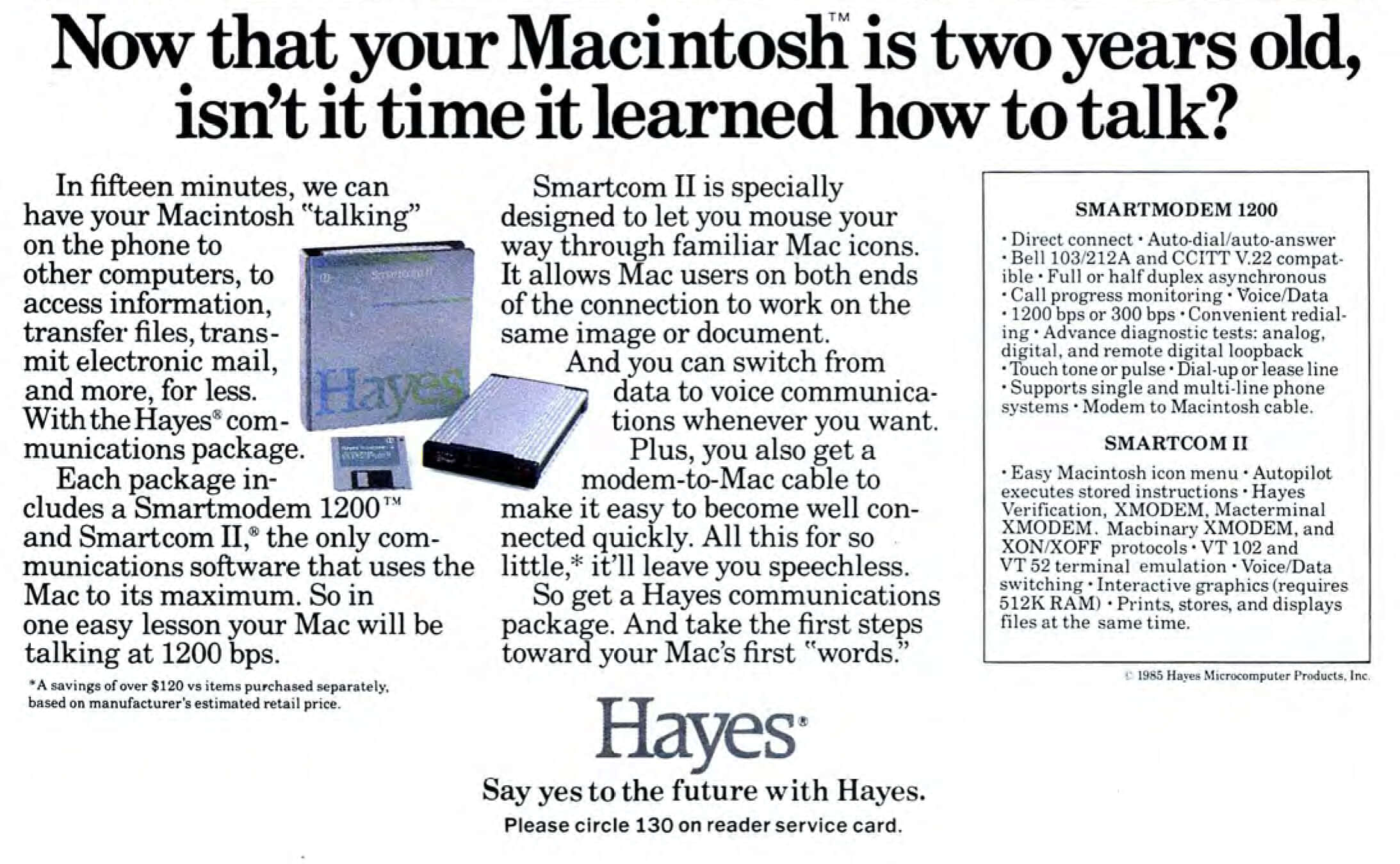 And the mysterious Mac Underground offers a network of “SafeHouses” from director Jerry Daniels on page 10.

MIDI to the Macs

On page 91, we discover the “exotic and yet technical” MIDI.

Whenever a new level of technology is introduced into any industry, there’s an aura of mystery and misconception about it’s real capabilities. MIDI is a new technology that simplifies the process of making music. But many people who have heard about MIDI may not know what it means.

MIDI (Musical Instrument Digital Interface), the brainchild of a number of American and Japanese musical instrument companies, was introduced in 1983. It defines a standard way of converting the information processed in a synthesizer into binary code, so that the information can be shared with other synthesizers and other binary devices, including computers. 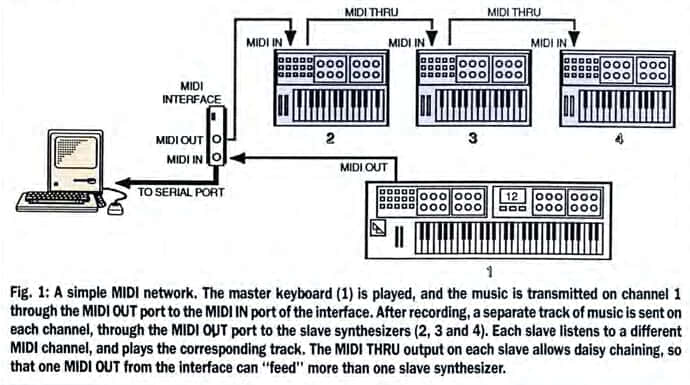 MacUser goes on to look at hardware and software options for beginners and professional musicians alike.

With MIDI and a couple of Casio CZ-101’s, anyone with an ear for music and some keyboard knowledge can simulate the capabilities of a multi-track recording studio in their homes, without buying expensive multi-track recorders or mixing boards.

Novels of the Mind

“Hitchhikers’ Guide to the Galaxy” author Douglas Adams recalls a story about a young boy asked to pick which version of “Hitchhikers” he preferred, the radio show or the television program. “I liked the radio one much better,” said the boy. “The pictures were better.”

Tracie Foreman Hines dives into the world of text adventures on page 96: 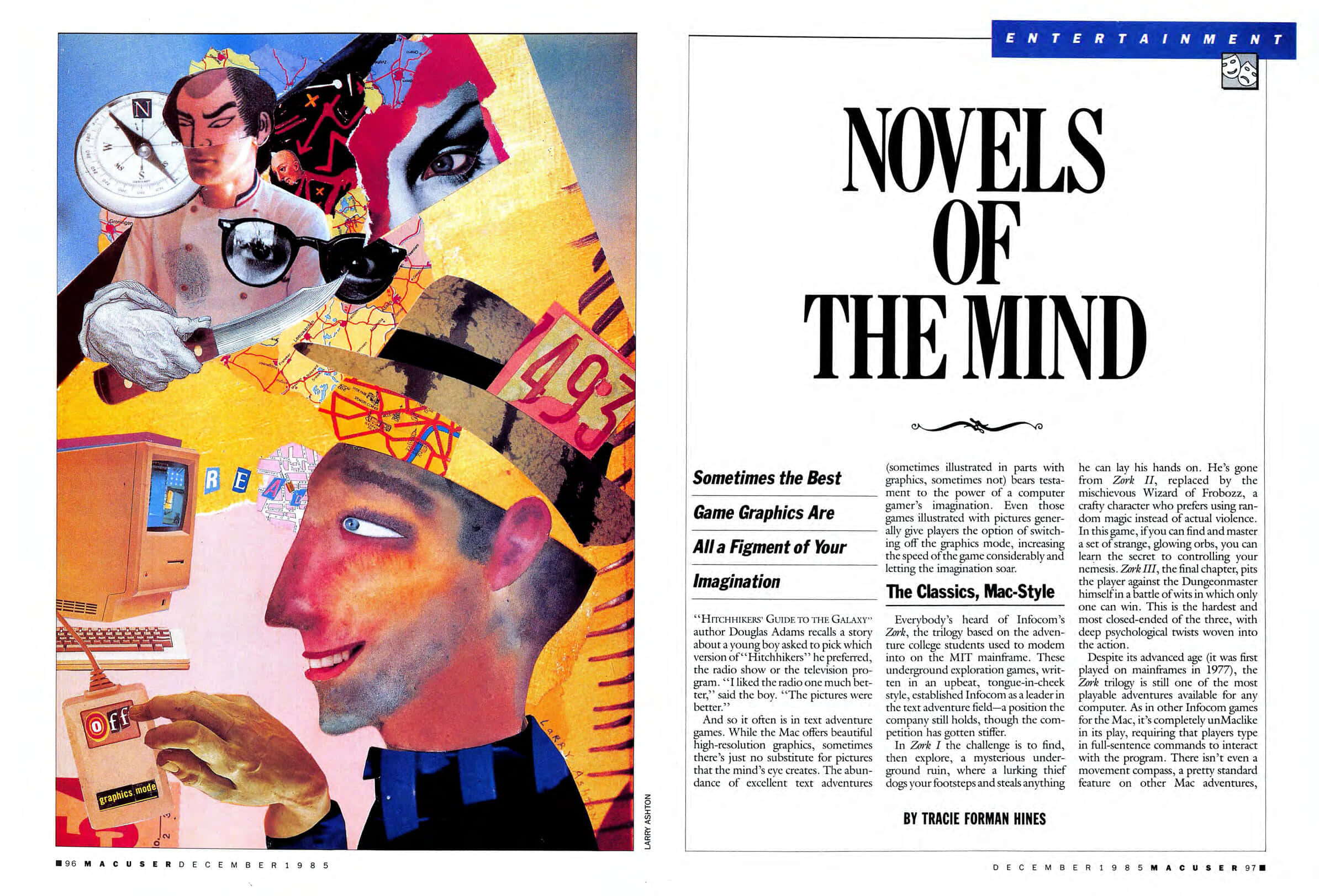 While the Mac offers beautiful high-resolution graphics, sometimes there’s just no substitute for pictures that the mind’s eye creates. The abundance of excellent text adventures (sometimes illustrated in parts with graphics, sometimes not) bears testament to the power of a computer gamer’s imagination. 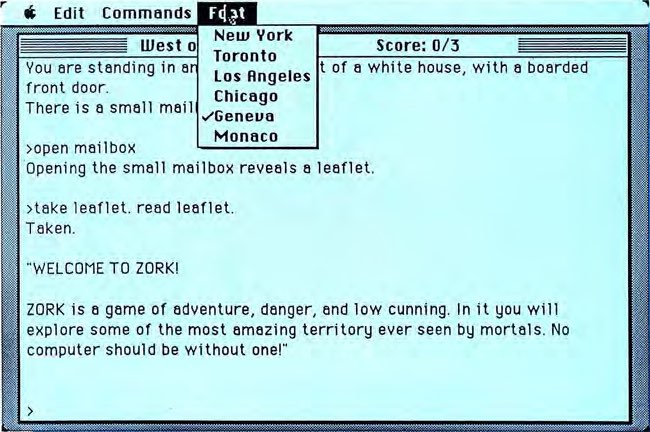 In Zork I the challenge is to find, then explore, a mysterious underground ruin, where a lurking thief dogs your footsteps and steals anything he can lay his hands on. He’s gone from Zork II, replaced by the mischievous Wizard of Frobozz… 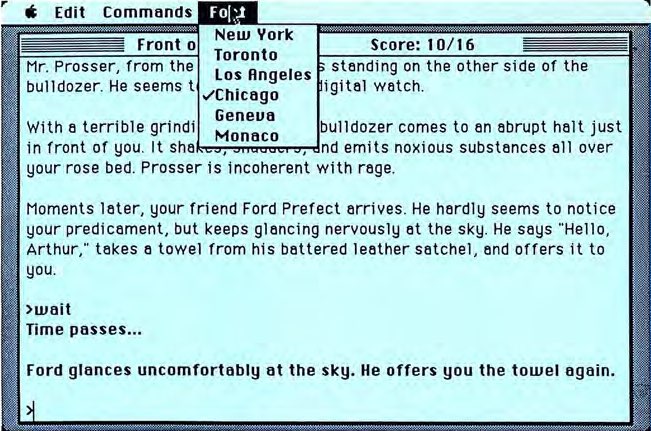 Infocom’s The Hitchhiker’s Guide to the Galaxy is probably the most successful novel that’s made the transition to the Mac screen.

The whimsical tone from the novel is reflected in the fact that the program doesn’t take itself seriously at all - as a matter of fact, there are times when it outright lies to you! The package includes such essential items for cross-galactic travelling as an envelope containing a Microscopic Space Fleet, a Don’t Panic! button, and of course, genuine souvenir pocket fluff.

We’ll be hearing more from Douglas Adams in later issues of MacUser. 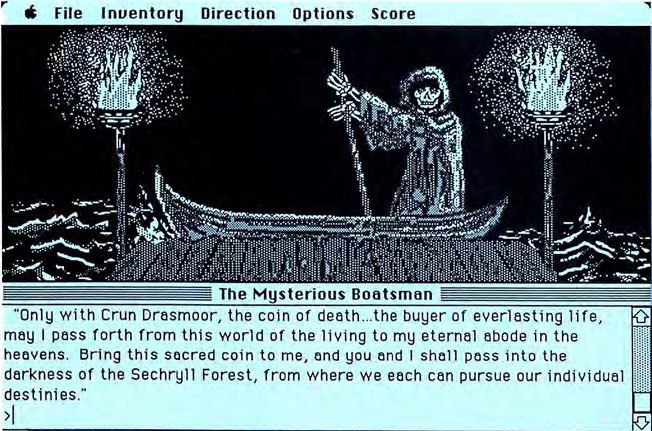 While most of the “action” in text and illustrated adventures takes place in the mind’s eye, sometimes a picture is indeed worth a thousand words.

Legacy (Challenger Software) features so many high-res screen illustrations that the game comes packaged on two disks instead of one. The gamer steps into the pointed shoes of a young wizard challenged with retrieving a magical orb from the evil Drab Castle and placing it into the hand of the eldest of the Wizards of the Universe, the one who sent you on this quest.

The List Goes On
Text adventures are among the most popular types of computer games, with so many titles available that it’s impossible to list them all here. Whether your taste runs to murder mystery, fantasy, science fiction or high adventure, there’s a story waiting to unfold on your screen.

The Digital Antiquarian is an excellent resource on the history and culture of text adventures - for example: Exploring Zork, Part 1.

On page 120, we get the inside scoop on Switcher. 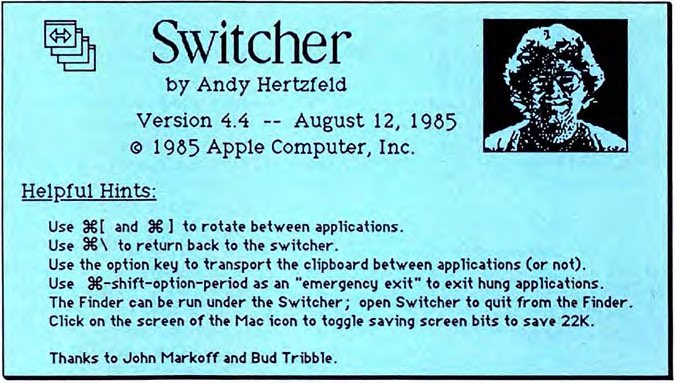 What Is Switcher?
Switcher is a utility program for the Macintosh 512K and XL that allows you to have more than one application in memory simultaneously. The advantages to such a scheme are many.

How does Switcher actually work?
From Inside Switcher by Andy Hertzfeld.
Switcher performs some of the same functions as the Finder and the loader, allowing users to select and launch applications and documents. Instead of using the ROM’s Launch routine like the Finder does, Switcher uses a special routine that launches an application into a subset of available memory, allowing multiple applications to reside simultaneously in memory. An application’s current state (all memory locations and register values that are specific to an application) is mostly concentrated in its heap and stack areas, but also includes various low memory globals and system heap objects. Switcher must maintain multiple copies of these shared low memory and system heap areas and save and restore them during context switching. 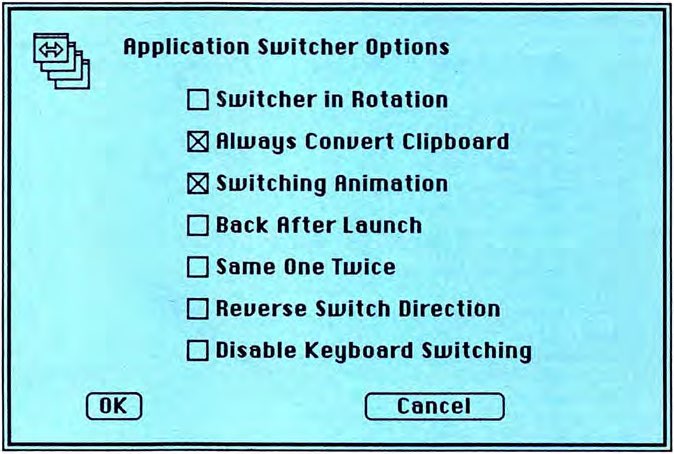 Read the story of Switcher in Andy Hertzfeld’s own words (folklore.org):

“OK, I’ve seen enough, " Steve interrupted me. “It’s great. Apple is going to bundle it with the Mac. Congratulations.”

Cooperative multitasking proper came to the Mac in 1987 with MultiFinder. Watch out for coverage of MultiFinder in a later post.

A Macintosh History 86.01 travels to January 1986, where MacUser chooses the best products of 1985. We also play detective in Deja Vu: A Nightmare Comes True, find a way to cool your Mac, learn that Steve Jobs has resigned from Apple, and get insights from Andy Hertzfeld. Programmers are not forgotten, with a tasty alpha-beta soup and a comparison of BASIC, C, Pascal, and Forth.