Welcome back to A Macintosh History: a history of the Apple Mac told through the pages of MacUser magazine. This post is based on the January 1986 issue. New to the series? Start at the beginning with October 1985.

This month, MacUser chooses the best products of 1985. We also play detective in Deja Vu: A Nightmare Comes True, find a way to cool your Mac, learn that Steve Jobs has resigned from Apple, and get insights from Andy Hertzfeld. Programmers are not forgotten, with a tasty alpha-beta soup and a comparison of BASIC, C, Pascal, and Forth. 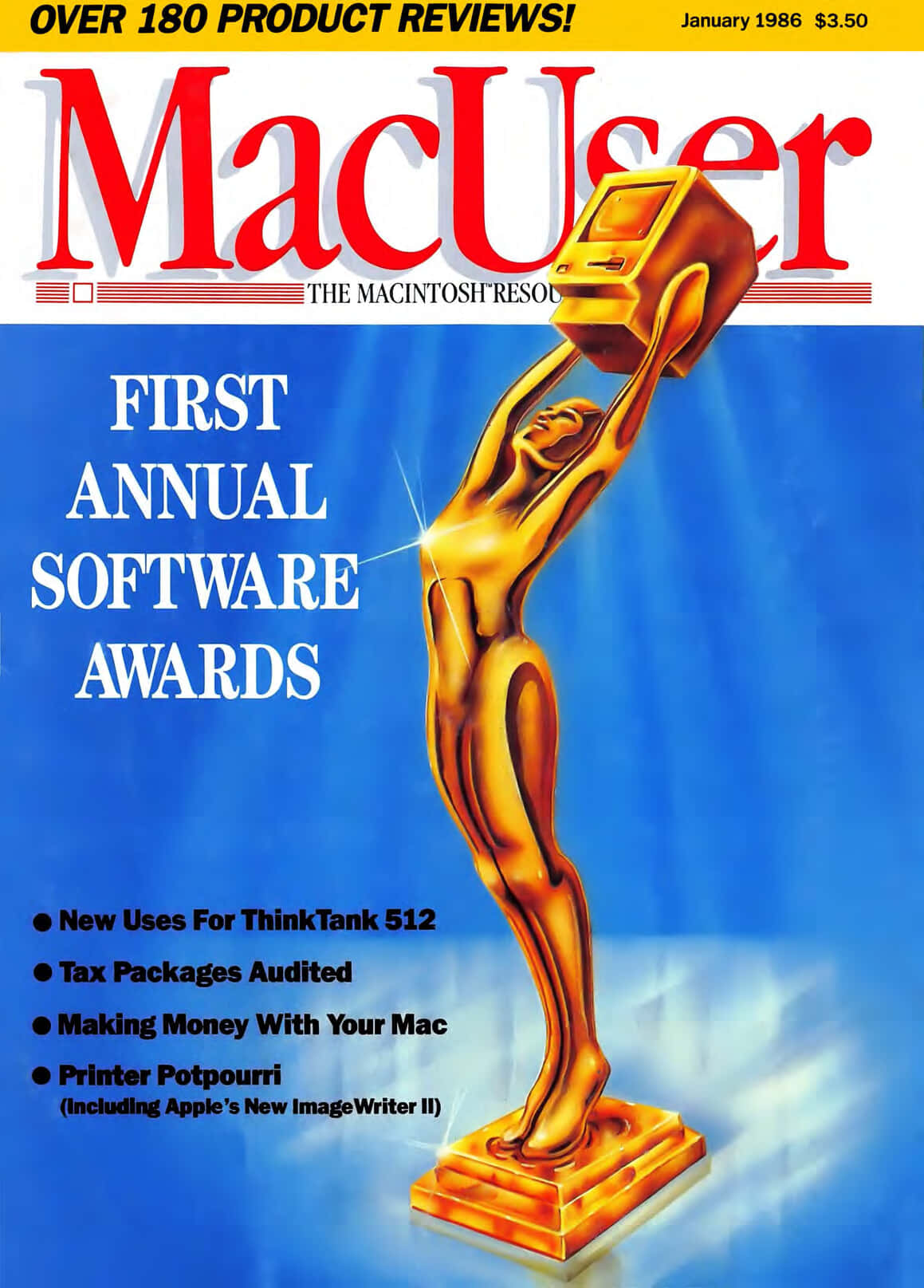 Pick up your copy of MacUser January 1986 from the Internet Archive. Download 68K Mac software from Macintosh Garden and Macintosh Repository.

On page 9, Neil Shapiro takes on user interface consistency. It’s worth reading the whole thing, but here’s an extract:

According to some people, writing programs for the Macintosh is similar to wearing a velvet, fashionably-cut and designer-styled straitjacket.

It all goes back to the design philosophy of the Mac Team and to Apple’s published tome Inside Macintosh. In this book, (which looks and weighs very much like a huge and wizardly incunabula that you might find on a dust-covered podium within the laboratory of an alchemist such as Hermes Trismegistus), Apple spells out just how a Macintosh program can and should run from the standpoint of the guy running the mouse.

After all, one of the things that makes the Macintosh so intuitive to use is that you do not have to relearn how to do everything whenever you launch a new program. The Macintosh interface is a little bit of terra firma.

You can read the original Inside Macintosh thanks to VintageApple.org.

John Dvorak’s column, The Devil’s Advocate (October ‘85), comes in for a lot of flack from readers. Here’s Shari Leventhal (Arlington, VA) on page 15:

As a woman, and a computer user since early 1979, I was deeply offended by much of the language in Mr. Dvorak’s piece, particularly the second paragraph in which he stated that “The AT is man’s computer design by men for men.”

I would like to ask Mr. Dvorak what the AT would have looked like had it been designed by women for women? Is his later analogy between the Macintosh and a Cuisinart supposed to give us a clue?

If Mr. Dvorak is implying that the Mac is a “wimp’s” machine because it was designed without some sort of male focus, then he is sorely mistaken.

Meanwhile, the MacBCool cools your Mac (at some cost in elegance). It wasn’t until the Macintosh SE that a compact Mac got a fan.

The MacBCool is an add-on device that fans cool air through the Mac’s convection cooling system, a boon to those who use their computers in confined areas or over extended periods of time. 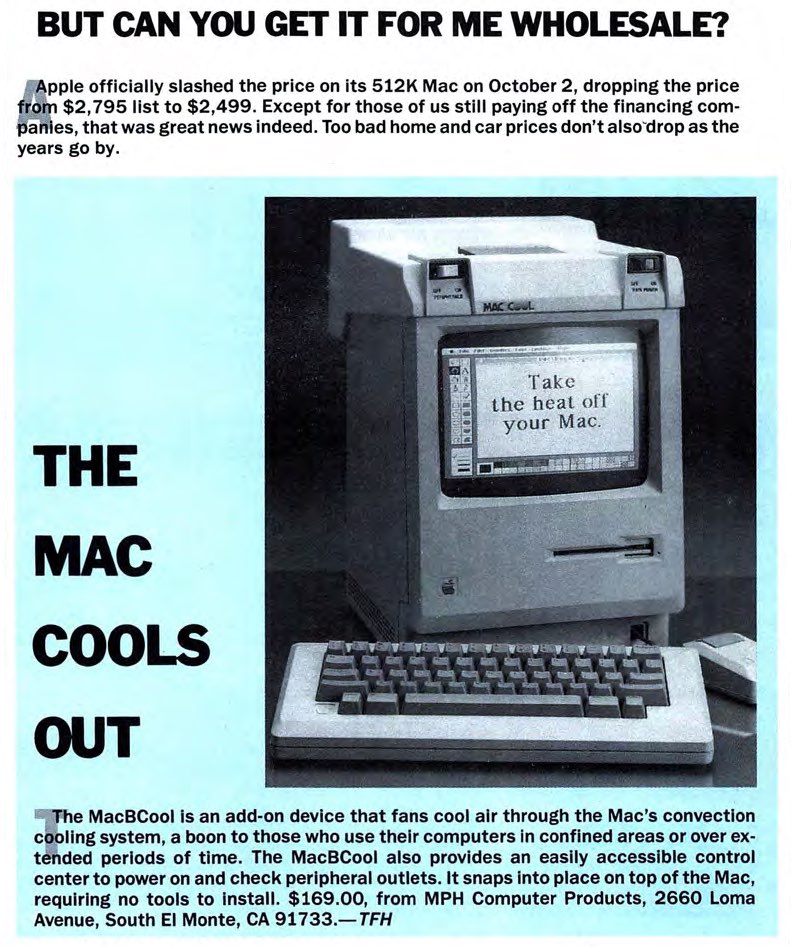 Software piracy: Most people with pirated software “Never would have bought it anyway, at any price. It’s hard for me to feel sorry for Lotus when they complain about the money they’re losing.”

Software prices: “It’s inevitable that the price of programs will come down as the installed user base gets larger.”

Developing the Mac: “Our biggest mistake was not enough attention to the needs of a hard disk user… because of Lisa being the hard disk system.”

Amiga: “Every program will have a different user interface … it [the machine] was poorly thought out.”

GEM: “Like a Mac duplicated with a Bizarro Ray.” (Remember Superman comic books? The Bizarro Ray made imperfect, clumsy clones.)

Future of Apple: “…in the short term, 3 or 4 years, is very good. After that, just another billion-dollar company.” Because…

Steve Jobs: “…with Steve gone, they have reactionaries instead of visionaries… the ’next Mac’ won’t come from Apple.”

Steve Jobs resigned his position as Chairman of the Board at Apple Computer and announced his plans to form a new company to make computers for universities. Five Apple staffers resigned their positions to join him.

And intellectual property: would Lisa and Macintosh exist without Xerox PARC?

Apple must of course protect its interests and the interests of its shareholders. The industry is young enough that the distinction between what is and isn’t proprietary information is still somewhat unclear. But I can’t help thinking back a few years and wondering what would have happened with Lisa and Macintosh if it hadn’t been for people and ideas developed first at Xerox PARC. 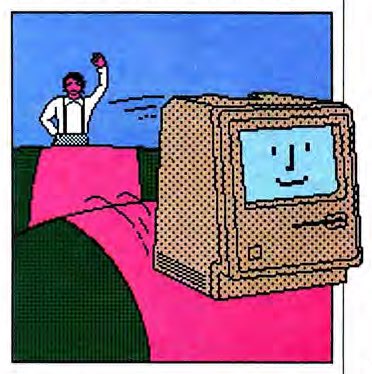 Meanwhile, amid renewed rumors of a takeover bid made and accepted, Apple announced several new products, including the long awaited external hard disk drive for the Mac.

Given Apple’s history, consensus was that the drive would be priced at $2495. Wonder of wonders and miracle of miracles, the Apple 20-megabyte external hard disk (I hope someone gives it a catchier, shorter name) has an announced price of $1,499.

This is a momentous occasion, an announcement of incredible importance. The hard disk is nice, but the price is phenomenal! It’s realistic, reasonable, responsible, affordable, and most of all, totally uncharacteristic.

Through The Looking Glass

Steve Capps, coauthor of the Finder, has, with a lot of help from Lewis Carroll, created an enchanting arcade game in the guise of a chessboard.

The game is quite playable, although a very quick mind and hand are needed to get a good score. It doesn’t quite offer enough variety to be a long-lasting attraction, but the first few times it is great.

The Editors’ Choice Awards For 1985 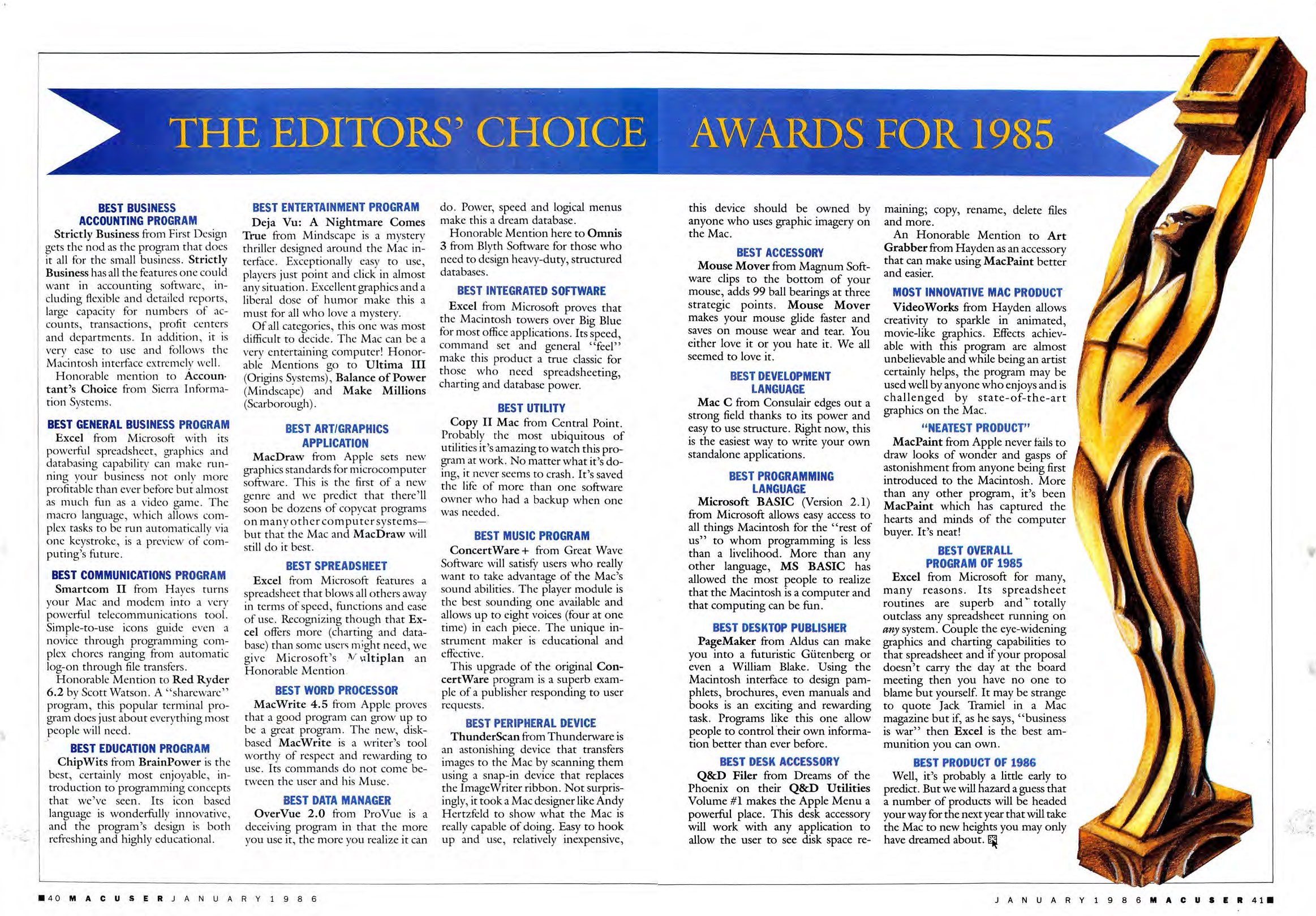 Excel from Microsoft for many, many reasons. Its spreadsheet routines are superb and totally outclass any spreadsheet running on any system. Couple the eye-widening graphics and charting capabilities to that spreadsheet and if your proposal doesn’t carry the day at the board meeting then you have no one to blame but yourself. It may be strange to quote Jack Tramiel in a Mac magazine but if, as he says, “business is war” then Excel is the best ammunition you can own.

We’ve plenty of other Excel coverage, including MacUser’s review of Excel (Oct ‘85) and a guide to creating Excel macros (Dec ‘85).

On page 68, Richard Herbst digs into your printing options in early 1986:

Would you rather buy a LaserWriter or a car? Both are expensive; but both take you places you’ve never been.

This article will treat a relatively small number of printers. The emphasis is on alternatives to the LaserWriter and the ease with which widely different machines can be brought under the exquisite control of the Macintosh.

There are four basic types of computer printers: laser, thermal, impact and ink jet. Typesetting machines and plotters are in their own special categories and will be treated later. 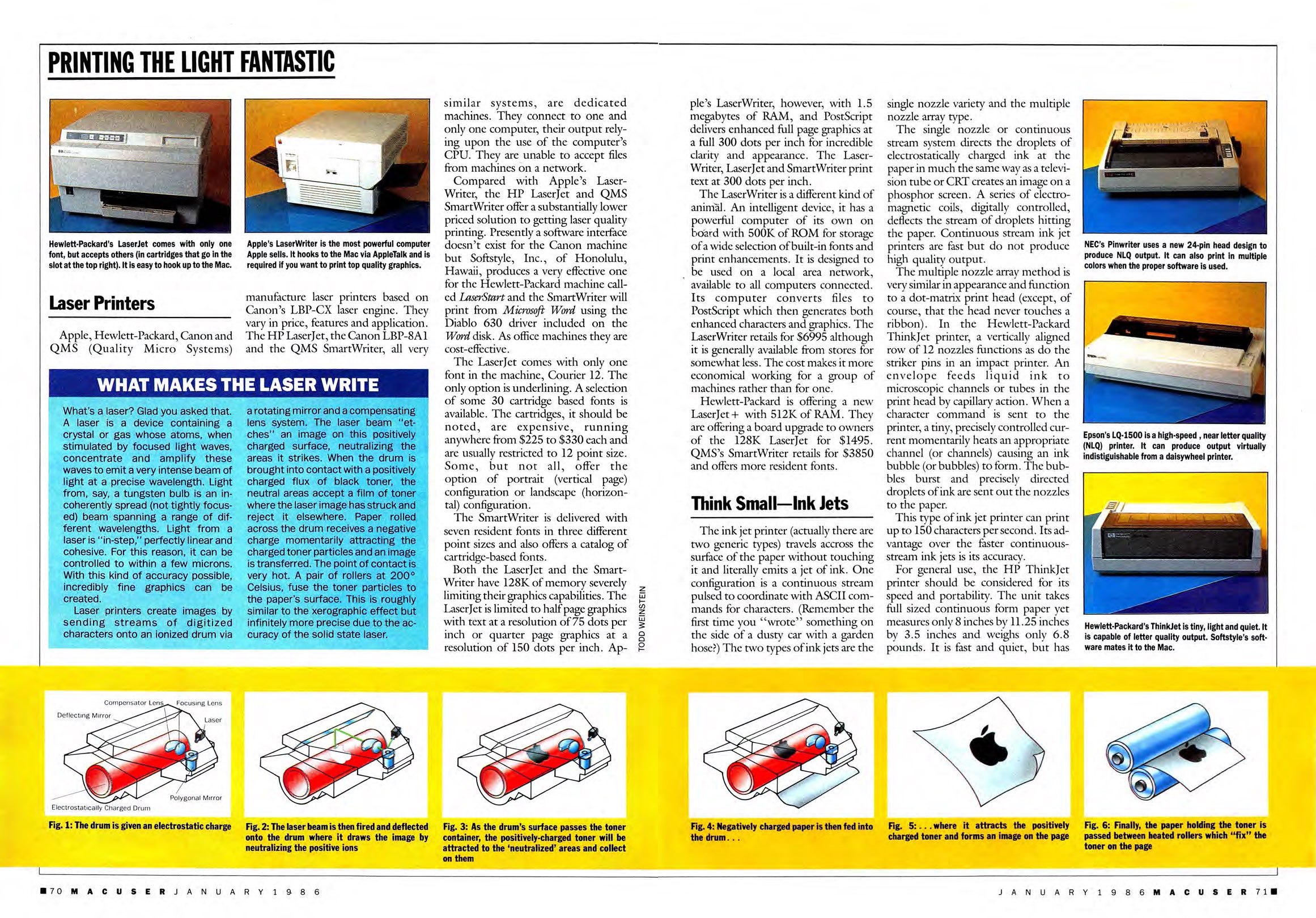 My head cleared slowly. Through the haze I could vaguely make out my surroundings. I squinted, stretched, and found that my arm was sore and stiff, as if I had just gotten some sort of shot… Slowly my eyes came into focus and I found myself in the stall of a filthy men’s room john.

Deja Vu: A Nightmare Comes True is one of the best things to happen to the Mac since the LaserWriter. Just when Mac-owning computer gamers were starting to envy their friends’ huge collection of game libraries, along comes a game truly Mac in flavor, execution, and style.

The Digital Antiquarian has some fine words for Deja Vu too:

In the fall of 1985, when the first MacVenture debuted in the form of a two-fisted private-eye caper called Déjà Vu, it was an absolute stunner, the sort of thing that could stop people in their tracks when they stumbled across it running on an in-store computer.

As a relatively coherent work of fiction, it stands amongst the top tier of 1980s adventure games.

Part of the delight in reading early MacUser comes from the surprising diversity of topics. After a couple of game reviews, we come to page 98, where chess grandmaster David Levy shows you how to use an alpha-beta search algorithm.

Programming a computer to play chess and other two-player strategy games is a lot more difficult than mastering the game itself. It requires a thorough understanding of game principles and the ability to program carefully constructed algorithms which search all the possible moves, evaluate playing positions and make the right decisions.

Many zero-sum (non-scoring) two-player games, such as chess, checkers, and reversi (Othello) can be represented in a computer program by a game tree.

The quality of a two-player game program is largely a function of the power and speed of its search algorithm. By incorporating techniques such as those described here, you can develop very capable and intelligent game programs.

Learn more from the article’s bibliography and Alpha–beta pruning (Wikipedia).

There are almost as many opinions as to which programming language is best for the Mac as there are programmers. We asked some of the top programmers in each language to tell us, in their own words, what makes their own choice best for the types of programs they create.

There’s a handy table laying out your choices (page 112):

Clipboard access is probably the most important of BASIC’s features, because it lets you import and export items to and from BASIC. You can program an intricate design of precise mathematical proportions and paste it into MacPaint; even better, you can draw something in MacPaint and use it in your BASIC program.

Read the BASIC tutorial series (begins Nov ‘85) and A Vote for MacBASIC (Jun ‘86), which explains how BASIC could have been even better on the Macintosh.

For programming the Mac on the Mac, assembly language and C are the only reasonable choices for commercial applications. Assembly language is fine if you think in hex and are willing to write 10 to 20 lines of code for each little step your program takes. But the beauty of C is its elegance and brevity. With short, easy-to-remember keywords like “while” and “do”, you can create fast, powerful programs that look and act just as you’d imagine them. Once you’ve learned the syntax (something you’ll have to do with any language), C becomes an expressive language that you actually can think in.

Over the years, I’ve used just about every popular computer language, and while there are several that fit my criteria, my choice is Pascal. Pascal is a structured programming language. As opposed to free form languages like Forth, Pascal requires the programmer to follow a set of guidelines and rules that results in programs that are clean and readable. In return for this bit of regimentation, Pascal provides a bevy of features and conveniences that make a programmer’s life a little easier.

Steve Troughton-Smith has an introductory post on Lisa Pascal Development in Lisa Workshop (Tumblr) with source on GitHub LisaOSToolKitSample.

Nick Karp On Forth

No one language can have the tools needed for every application. Forth doesn’t try. Instead it has a minimal kernel which is extended as desired. Most of the Forth language is itself written in Forth, giving the programmer complete flexibility to customize the system.

Source code, object code, and working environment are all extraordinarily compact. Whereas even mid-sized Microsoft BASIC or MacPascal programs are cumbersome or impossible on a 128K Mac, Forth works fine, leaving 55K of only slowly consumed programming space.

You can download MacForth, but sadly there’s no tutorial series in MacUser.

Finally, on the back cover, we find an advert for a disk the Mac can’t digest: 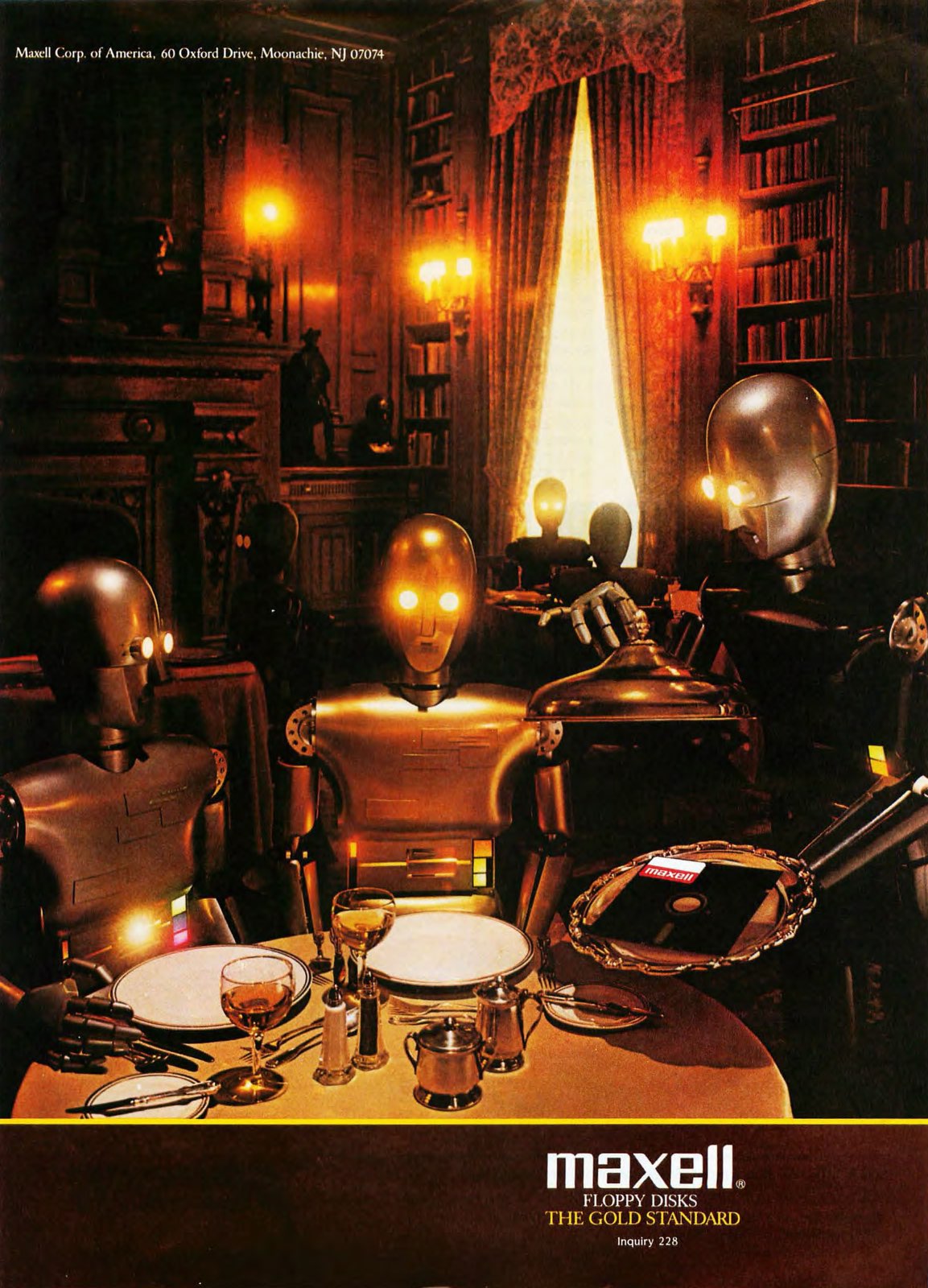 A Macintosh History 86.02 travels to February 1986, where Neil Shapiro talks slots, the Apple Hard Disk 20 arrives with HFS, and we create a function key with 68K assembler. If that wasn’t enough, we take on slime monsters in Rogue, put your Mac in touch with the world, look at free software, and find a desk designed specifically for the Mac.